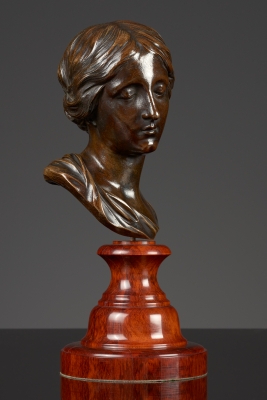 This bronze bust is a version of the copy made after the marble statue of Saint Susanna in church of Santa Maria di Lorenzo in Rome, commissioned from Duquesnoy in 1628. This copy is cast in France, almost certainly Paris, in the second half of the seventeenth century. The hair of the madonna is very finely chased. This chasing bears great similarity to the chasing of the hair of the bust of Amor in the Kunsthistorisches Museum in Vienna. The iron core still resides in the bust, which implicates that this cast has been made by means of the ‘cire perdue’ method.
Other copies of this small bronze were to be found in the Russian collection of Paul Delaroff, auctioned in Paris in 1914 (lot 526), the collection of the Italian Ambassador in Vienna, presently in the Palazzo di Veneziani in Rome, and in the collection of Sir Brinsley Ford.

François Duquesnoy (1597-1643), aliased Franscesco Fiammingo due to his Flemmish roots, was a sculptor from the Southern Netherlands, who worked in Italy for the greater part of his life.
Already during his lifetime the work of Duquesnoy was highly praised throughout Europe. The painter Nicolas Poussin arranged an introduction to cardinal Richelieu who offered him a position as sculptor to the Court of Louis XIII and the prospect of establishing a Royal Acadamy for Sculpture in Paris. Duquesnoy was getting ready to sail from Livorno to France, but died before he could commence his journey. Outside Italy his fame was particularly great in France. The Sculptor to the Court of Louis XIV, François Girardon, owned a large number of terracotta models by Duquesnoy, as can be derived from the inventory that is taken from his collection after Girardon’s death in 1715. The collection of prints of antique sculpture that Girardon assembled contained a number of busts by Duquesnoy. 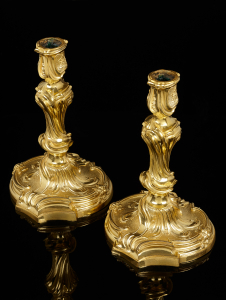 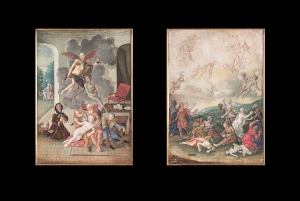