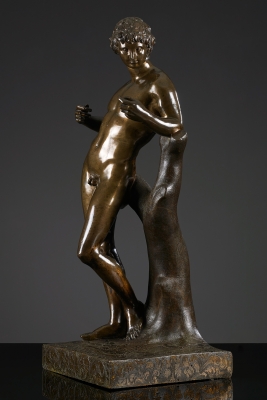 A Young god is leaning to a tree, in a graceful contrapposto. His left hand originally held a now-missing bow with his right hand he gestures as if pulling a bowstring demonstrating how to shoot an arrow.  This is Apollo demonstrating his skills with the bow and arrow. The plinth is engraved with a renaissance pattern.  This statue was cast after a model By Francois Duquesnoy.

François (Frans) Duquesnoy (Brussels, 12 January 1597 - Livorno, 12 July 1643) was a prominent baroque sculptor originating from the Southern Netherlands who spent an important part of his career in Rome.  As a native of Brussels, the Italians referred to Duquesnoy in Rome as Il Fiammingo and the French as François Flamand. His father, Hieronymus Duquesnoy the Elder, was sculptor at the court of archduke Albrecht of Austria (1559-1621) and archduchess Isabella of Spain. When he arrived in Rome in 1618, he studied, according to his earliest biographers, the antique sculptures en detail; he even climbed the equestrian statue of Marcus Aurelius to find out how it was moulded. In 1624, Nicolas Poussin arrived in Rome, a French artist. The two artists shared the same house. They developed an artistic canon, characterized by ideal expressive figures, who stood out against the theatrical baroque of Bernini. Critics of that time, such as Giovanni Pietro Bellori (Life of modern painters, sculptors and architects, 1672) praised Duquesnoy’s art and compared it to ancient Roman sculpture. Like other sculptors who worked in 17th-century Rome, Duquesnoy was asked to extensively restore archaeological objects.

A bronze Mercury was ordered by the collector of antiquities Vincenzo Giustiniani, as a counterpart to a Hellenistic bronze statue of Hercules in his collection, a compliment for Duquesnoy and implicitly a recognition of the equivalence of the "Antiques" and the "Moderns".

Except for his brother, who assisted him in his studio,  it was the principal collaborator and pupil Artus Quellinus the Elder, who brought the classic Baroque style of Duquesnoys circle to Amsterdam when he returned from Rome.

During his restorations of ancient statues, Duquesnoy had studied the youthful male nude closely. A second bronze by Duquesnoy which was a variant of the ancient type of a languid, leaning youthful male nude was designed by the sculptor as a pendant to the Mercury, evidently not for Giustiniani but for another patron. Bellori described this Apollo as ‘posed like the Belvedere Antinous’, a marble statue from antiquity now in the Vatican Museum. Apollo and Mercury pairs were acquired by a number of other collectors throughout Europe.    Nowadays quite a number of these pairs are known, originating from the 17th century as wel as later casts.

However it is not clear which version was the Giustiniani Mercury, it is generally acknowledged that the pair in Liechtenstein is one of the  prime versions executed by Duquesnoy himself

The Liechtenstein Apollo, together with a counterpart Mercury, is described for the fist time in an inventory of 1658. Both statues have a bronze putto to their feet.

Several bronze replicas have been made until the 18th century sometimes with and sometimes without the putto. Then the authorship of the statues was lost and only rediscoverd in the 20th century. Boudon-Machuel counted 15 replicas of the Apollo. Our Apollo is described in French with the specific features distinguishing this one from all others under number In 55 ex.15.:

“Good state of conservation, the foot is restored after a defect during World war II there is no trace of a possible cupid on the foot. the foot is engraved with floral motifs. This example of the Apollo distinguishes it selves from the Apollo by Duquesnoy by details which prove that the model was modified. The left leg is not clearly separated as is by other models, the arms are less folded,  the head is elongated, the hair less voluminous more plated to the head. The chasing is sharp round the eyes and in the details of the face. The form of the nails is unprecedented in other examples of this statue. There are no traces of a lost cupid on the foot, so this statue was probably conceived without one.”

The statue was submitted to a XRF-test by Arie Pappot of the Rijksmuseum in September 2017. In his report he states that this particular statue was cast in France after 1650 but before the close of the 17th century.

This technical examination of the statue confirms the view of Boudon-Machuel of a slightly modified Apollo after Duquesnoy.

The evidence for the popularity of replicas of Duquesnoy’s Apollo throughout Europe is affirmed by the fact that the Apollo was painted in an interior by the Spanish painter Antonio Pereda (1608-1678) as standing on the table. (Stirling Maxwell collection, Glasgow). Early pairs are in the Spanish Royal collection, Liechtenstein and The Louvre. An Italian source learns us that on 12 June 1686 Luigi Omodei brought home to Milan from Rome two bronze statues representing Mercury and Apollo modelled by Francesco Fiamengo modern. A fine variant of a cupid (without Apollo has been in the Danish Royal Kunstkammer since 1673/74.. Examples that have survived, some with and some without cupid, are more often of Mercury than of Apollo. 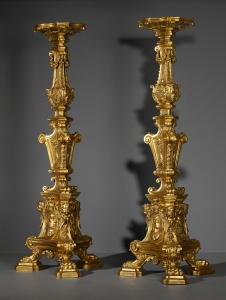 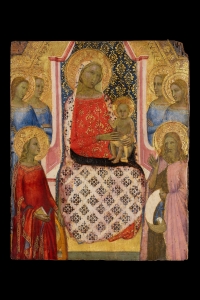 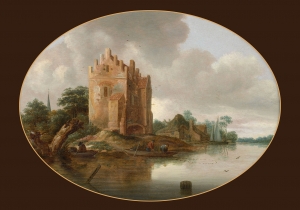