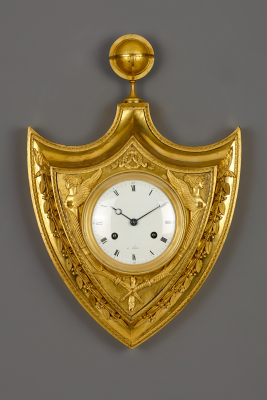 A gilt bronze French Empire Cartel d’Applique with an eight-day movement with anchor escapement. The striking mechanism on the locking plate strikes the hours on the hour, a single strike on the half hour. Inscribed ‘á Paris’ on the enamel dial. The hours are indicated by Roman numerals and the minutes by Arabic numerals. The blued steel Breguet hands.

The case in the severe form of an escutcheon surmounted by a globe. The dial, which is closed off by a lunette with glass, is flanked by mirrored depictions of Aurora, the Roman goddess of the dawn. The sides adorned with a frieze of blooming laurel foliage. Decorative palmettes at the bottom. Above the dial a laurel wreath, the attribute of Apollo as the protector of the Arts. The globe surmounting the escutcheon is another motif linked to Apollo, identifying him as the god of the Sciences. In portraiture, blooming laurel wreaths and scrolls often referred to to the artistic background of the sitter, such as a literator or an artist.

In 1810, a similar cartel was delivered to the Grand Trianon at Versailles for the Cabinet topographique de l'Empereur. This cartel clock is still in the possession of the Museum of Versailles.

The clock is signed on the back plate: Picnot. However, according to Tardy, it probably concerns the bronzier and not the watchmaker. 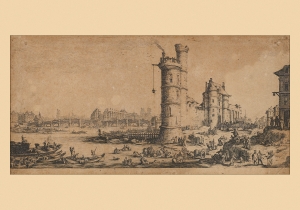 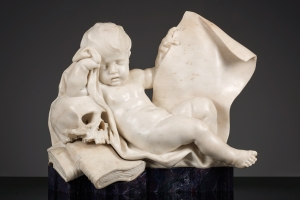 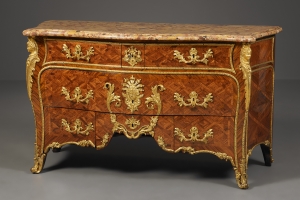