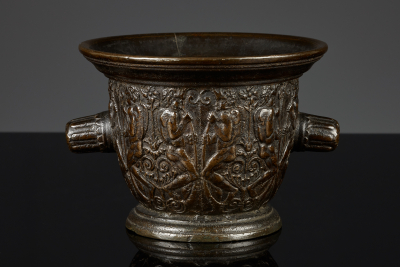 A patinated bronze mortar with a bell-shaped body with a smooth lip and two fluted handles, all on a smooth finish base. The bowl decorated with a frieze depicting six pairs of trumpeting satyrs facing each other. The pairs are separated by stylised floral ornaments.
The mortar can be linked to a group of virtually identical pieces and can be attributed to Abraham le Boucher, who was working as ‘maître fondeur’ in Rouen in 1610. This type of mortar was previously attributed to the École Fontainebleau in the past due to the use of the musician satyr. This motif was undoubtedly inspired by a stucco in the François I Gallery at the Château de Fontainebleau. However, Le Boucher could well have been familiar with the furnishings of the gallery as his direct ancestor, Benoît le Boucher, who worked with the sculptors of Fontainebleau during the sixteenth century.

The French word ‘mortier' (mortar) derives from the Latin 'mortarium', meaning 'receptacle for grinding and pounding'. Mortars were made in a variety of materials and, with their pestles, were the most important tools for grinding (medicinal) substances before the Industrial Revolution. Metal mortars were especially effective for solid substances.

Other fine versions of this mortar are now kept in Nantes at the Musée Dobrée, at the Museo di Capodimonte in Naples, and in London’s Victoria & Albert Museum. An example from the Rullier collection was sold at auction in Paris in 2011. 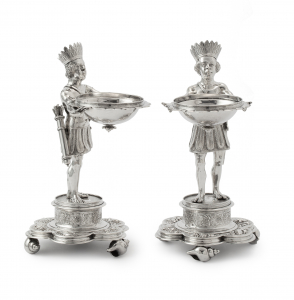 Pair of silver salt or sugar containers in the shape of “Moors” Adriaen Nicolaesz de Grebber, Delft, 1640
Price on request 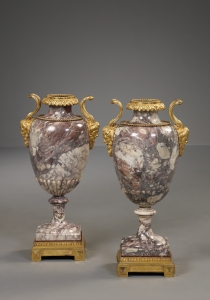 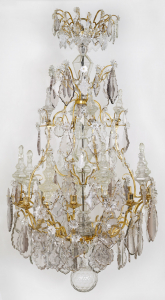