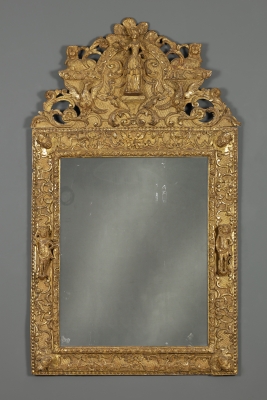 A gilt-wood mirror with an elaborately carved crest. The wide frame has a beaded edge at the outside. The frame is decorated with volute and acanthus motives. In each corner a masqueron that is facing in. on the middle of the side posts are two naked male figurines with loin cloths in a graceful pose. The inner edge is decorated with stylized volutes.
The crest shows a standing female in the center with a bird perched on her right hand. She is flanked by two sphinxes. On either side of the pedestal she is standing on two Fenix-like birds spread their wings. The entire crest is decorated with volutes and acanthus on a basic trellis shaped pattern in the background. Above the head of the female sculpture a canopy of Ostrich feathers is spread out.

It is utmost rare to find a separate mirror from the late 17th century. Typically, in this period, mirrors are integrated in the decorative paneling of a room. Singular mirrors, such as this one, sparsely occur as part of an ensemble that usually furthermore consisted of a console and a pair of gueridons. It was common practice to place such a mirror over a piece of furniture with the same width.

The maker of this mirror frame is unknown. Frames for paintings or mirrors were made by specialized ‘menuisiers’, who executed the designs of other artists. This mirror is made in the most perfect manner of the Louis XIV era and is reminiscent of designs from Jules Hardouin-Mansard (1646-1708), Robert de Cotte (1656-1735), and Pierre Le Pautre (1648-1716). 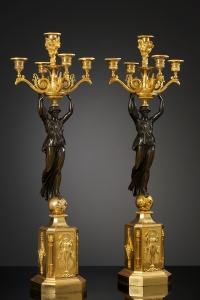 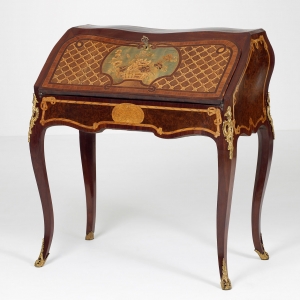 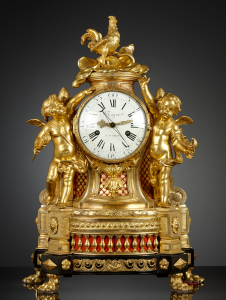