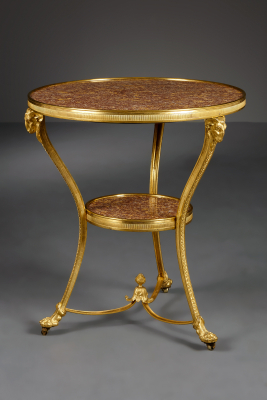 An elegant Russian pedestal table with a Brocatelle d’Espagne marble top with fluted frieze of gilt bronze. Three scroll legs capped by rams heads, joined by a smaller tier of marble with fluted frieze and terminating in claw feet under which small wheels have been fitted. The feet joined by gilt bronze concave stretchers, which are centred by a finial with fruiting corn boss and acanthus leaves. The slender legs decorated with a band motif of scrolled beads.

This gueridon is most likely the artistic result of a collaboration between the Russian architect Andrei Voronikhin (1759-1814) and the bronzier Friedrich Bergenfeldt (1760-1822). Andrei Voronikhin was born into the world-famous Stroganoff family. He is best known for his design of the Kazan Cathedral in Saint Petersburg. Apart from buildings and structures, he also designed many small architectural objects and furniture, of which many preliminary drawings were preserved. His French-inspired à l’antique style was of great influence on the stylistic development of the Russian decorative arts at the time.

The German born bronzier Friedrich Bergenfeldt (1760-1822) established his career in Saint Petersburg during the last decade of the eighteenth century. However, he was most likely temporarily active in Paris just before the turn of the century, where he may well have come into contact with the famous Parisian bronzier Claude Galle (1759-1815). Following his return to Saint Petersburg, his work after 1801 shows unmistakable similarities to that of Galle. The supreme quality of his production and craftmanship far surpasses that of the average bronzier active in Russia at the time. For this reason, Bergenfeldt was in high demand at the Russian imperial court and within the highest circles of Russia’s aristocracy. Although Bergenfeldt was the most celebrated bronzier from 1801 onwards, his active period was relatively brief, already coming to a halt in 1807. The reason for this is not known. 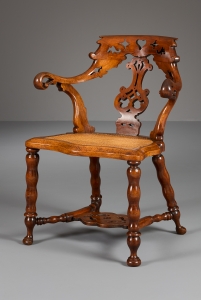 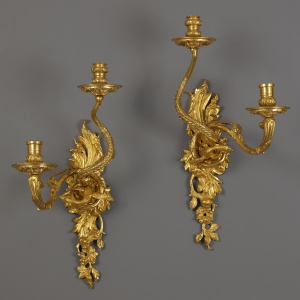 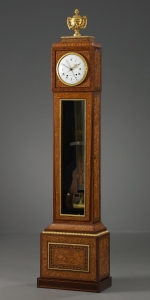