The lower section has bevelled corners and stands on flattened ball feet at the front. The lower cabinet is equipped with two doors and is decorated with raised cartouche-shaped frames, both on the doors as on the diagonally placed sides.
The upper section has two doors with six windows each. The bevelled sides each have three windows. The cabinet is crowned at the top by a sloping hood. The glazed doors follow the line of the hood at the top. The doors close into each other beautifully, without a door liner. The interior of the wall cabinet has a bottom shelf and two scalloped shelves, each with different grooves in which porcelain dishes can be placed.

This porcelain cabinet from around 1740 was undoubtedly crafted in the Netherlands, but also shows a clear English influence. The close political and trade relations between England and Holland from the time of William and Mary (1682-1702) naturally played a role in this double influence, but, contrary to what has been believed for a long time, the English influence on Dutch furniture continued well into the first half of the 18th century.
It’s no coincidence that from 1711, the Hague cabinet makers were obliged to make an “English cabinet” as their masterpiece in order to be admitted to the cabinet makers guild. 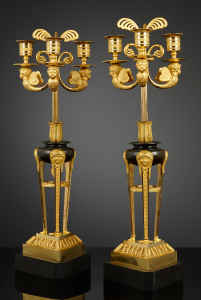 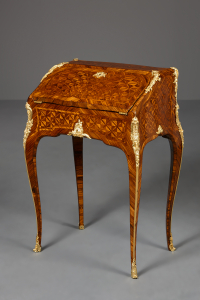 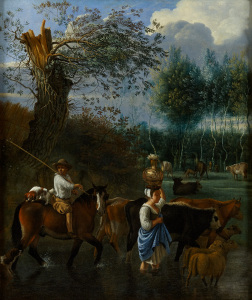