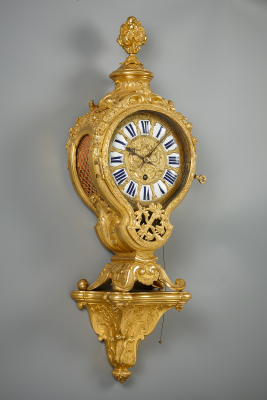 A French Régence gilt bronze wall clock featuring a spring-driven movement with a fourteen-day running time, verge escapement, pendulum with silk thread suspension and quarter pull repeat on three bells. The gilt bronze dial has a cartouche with the hours in blue enamelled Roman numerals while its foliate border is incised with the Arabic minutes. Signed on the backplate: Le Boeuf Paris.

The design of the strongly waisted case is also known as Tête de Poupée and originates from the Louis XIV period. In finely chased ormolu, embellished with sprays of spring flowers among foliage and a shell at the bottom. The sides feature pierced red silk-backed panels frames. The whole is surmounted by a top in the form of a flowering urn. On a small ormolu console decorated with a repetition of the motifs adorning the case.

This clock belongs to a small group of the earliest and rarest examples of cartels that are entirely made of ormolu. They most likely originated from a design by André-Charles Boulle (1642-1732). An almost identical cartel clock was sold at Christie's on 19 December 2007. And, although this cartel is topped by a patinated Cronos figure and has a deviant ornament beneath the dial, the case itself is virtually identical. Other similar cartels were sold at Sotheby's Monte Carlo in 1996 (lot 127) and at Sotheby’s London on 13 December 1974 (lot 232). 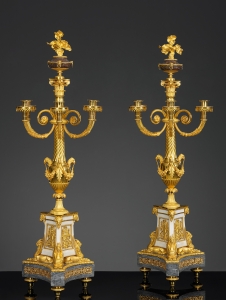 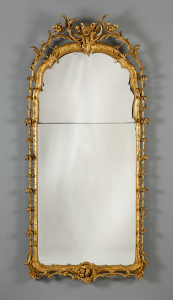