A pair of finely executed ormolu Empire candlesticks on a circular base richly embellished with palmettes and flowers. The tapered octagonal candlestick is held by three lion's paws atop an orb. The tree antique female busts on the upper part possibly represent the Vestal Virgins. Rich palm embellishment on the vase-shaped bobêches.

The distinct design with its typical stylistic elements and details can with certainty be attributed to the bronzier Claude Galle (1759-1815).

A leader in his field, Claude Galle was born at Villepreux near Versailles and moved to Paris to begin an apprenticeship under the fondeur, Pierre Foy. In 1784 Galle married Foy's daughter and on his father-in-law's death in 1788 Galle took over the workshop, which he built up into one the finest of its kind with a workforce of about 400 craftsmen. Galle promptly moved the business to Quai de la Monnaie (renamed Quai de 1'Unité) and from 1805 operated from 60 Rue Vivienne. First listed in the trade registers in 1784 he was received as a maître-fondeur in 1786 and promptly gained the first of many commissions from the Garde-Meuble de la Couronne under Jean Hauré from 1786-88.

He is known to have collaborated with Pierre-Philippe Thomire, amongst others, and was responsible for the majority of bronzes d'ameublement supplied during the Empire to Château de Fontainebleau. Other Imperial commissions included the supply of numerous vases, ewers, light fittings, figural clock cases and other fine bronze furnishings for the palaces at Saint-Cloud, the Trianons, Tuileries, Compiègne, Rambouillet and a number of the Italian palaces including Monte Cavallo, Rome and Stupinigi near Turin.

Yet despite numerous important commissions Galle was often in debt, partly on account of his lavish life style and also since many of his clients, such as Prince Joseph Napoleon, failed to pay him. After his death Galle's business was reopened and prospered under his son, Gérard-Jean Galle (1788-1846). His work can be found among the world's finest collections including those mentioned above as well as the Musée National de Château de Malmaison, the Musée Marmottan in Paris, the Museo de Relojes at Jerez de la Frontera, the Residenz Munich and the Victoria and Albert Museum in London.

The candlesticks are marked T104-Mo and T104-Vo on the edge of the base. 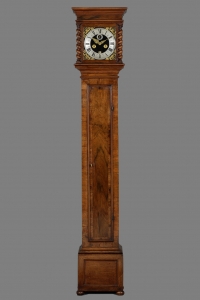 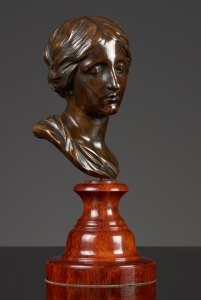 Bronze Buste of Susanna after François Duquesnoy
Price on request 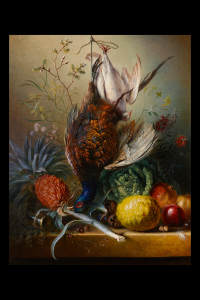