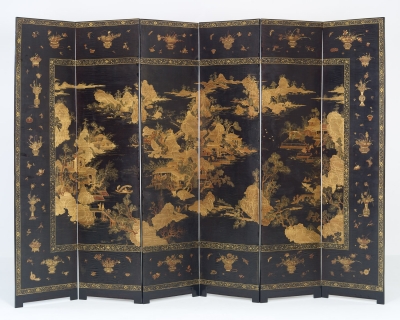 The screen exists of six panels that are connected with hinges and are decorated on both sides with lacquer motives. The decorations are in gold and red lacquer on black in so called makie technique.
Side A
Between two narrow borders with trails and flowers a wider rim decorated with baskets containing flowers and branches and motives of insects, flowers, vases and pottery and various eastern symbols. In the border of every panel we also see two or sometimes three interwieved rings.
Within the border a painted landscape: water with rocky islands with trees, pavillions with elegant parties of people. Most of the islands are connected with bridges. On the left a canopied boat with two people. On the right a flock of birds.
Side B
Between two narrow borders with trails and flowers a wider rim decorated with baskets containing flowers and branches and motives of insects, flowers, vases and pottery and various eastern symbols. We also see the interconnected ring-motives on some of the panels. The center painting on this side is also a landscape with rocky islands, pavillions and houses. On this side the characters seem to be depicting more everyday scenes. They are fishermen, a man transporting cattle on a boat, characters with a child by the water, labourers bearing things on the bridges.
The mingling of Japanese and Chinese notions, styles and implementation of workmanship on this screen is remarkable.
The division of the surface as we see it before us is not very Japanese. Typical Japanese depictions would rather leave the center blank. The pavillions have Chinese characteristics and we see Chinese characters and symbols. But al these Chinese motives, characters and symbols however were used in Japan as well, where they were interpreted in a specificly Japanese style. Some of the characters, but especially the rings, that we see on every single panel are Buddhist symbols that were both used in Japan and China and mean: when wisdom and benevolence are in balance there will be peace.
The implementation shows the hand of more than one craftsman and also Japanese and Chinese elements in the execution.
The materials used:
The wood panelling, the mosquito net, the nori-urushi, the red occre, the pigments and most of the gold are Japanese. The detailed and elaborate sections of the depiction are undoubtedly Japanese as well. But there are also less refined sections that could be qualified as ‘Chinese routine’. A number of the vases and pottery in the wide rim show this character and are an indication that not all of the craftsmen working on the panel had the same high level of skills.
Research during the restauration of the screen made clear that the contours of the rocky landscapes consisted of ‘prefabricated’ material. These lines were applied into the base lacquer and subsequently the rocks were covered with gold leaf and lacquered. This method of working is known to be much faster than the original Japanese mode of operation, where layers of lacquer mixed with lime were slowly build up. The rocks for that matter were varnished with poorly adhesive (Chinese?) material, that partly was lost during restauration, along with some of the guilding.
The screen was probably manufactured under great time pressure, which accounts for the more than one hand to be recognized in the paintwork. Another indication for the haste with which the project was realized is the rather frequent use of the hari-gaki technique: carving fine lines into the gold leaf to enhance the detail. This carving technique was however also used in the Japanese makie-technique. The hari-gaki technique is used several times in the flower baskets in the border. This carving was a faster work mode than leaving blank spaces whilst applying the gold leaf.
During the 17th, 18th and 19th century in Europe the quality of Japanese lacquerwork was much more preferred and appreciated than similar Chinese products. This is mostly due to the meticulous crafstmanship of the Japanese and the outstanding quality of the used materials.
The hypothesis of Prof. Dr. Christiaan Jörg regarding this screen is that it was commissioned in Japan through China, wereafter it could be sold on to Europe without the intervention of the Dutch East India Company. The Chinese tradesmen that ordered the screen could have presented possible motives or examples along with the commission as for how to decorate the screen. That could account for the style of arrangement on the surface and the possible Chinese “prefab” outline of the representation.
This screen, manufactured in “mixed styles” is undeniably of Japanese origin, and hence the second Japanese lacquer screen we know.
The hitherto single screen that was known can be found in the collection of the Victoria and Albert Museum in London. (inv. FE50-1980)
As earlier mentioned, Japanese lacquerwork was much appreciated in Europe, not only for what it was, but also for the purposes it could be used for. From about 1660 to the 18th century onwards many Japanese lacquerwork chests, cabinets and screens were sawed up only for the best parts to be used as decorative panelling in European furniture. All through the Barocque and Rococo periods (globaly from 1650 to 1750), elaborately decorated and guilded furniture was highly en vogue. An object like this lacquered folding screen that – even today – looks so abundant and valuable, met perfectly with the European demand for exotic interior objects of the day. 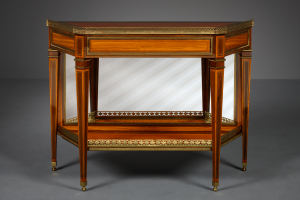 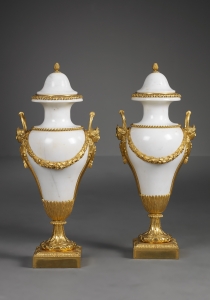