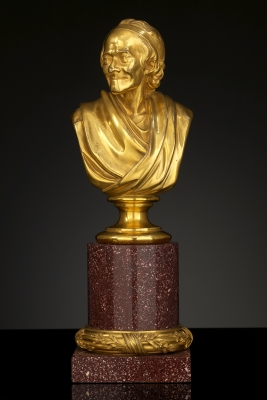 This buste of Voltaire on a porphyry base after the French sculptor Jean-Antoine Houdon is inspired by the busts of ancient philosophers. Many of Houdon's foreign patrons (such as Empress Catherine), as well as some private collectors of advanced taste  also wanted a bust of Voltaire. The first marble of Voltaire was completed by April 16, 1778 when the 18th century French journalist, François Métra noted: “All of Paris goes to the studio of M. Houdon to see a bust of M. Voltaire that is without question the closest likeness of all the portraits one has done of this patriarch”. News of the sitting echoed throughout Europe at which time Catherine II of Russia commissioned a bust for herself.
The gilt  bronze bust stands on a porphyry foot. In ancient times porphyry was found in Egypt. The site was lost after the fourth century and first rediscovered in 1823 after Napoleon searched for it in vain.

François-Marie Arouet, more commonly known under his pen name Voltaire, was a French Enlightenment writer, historian, and philosopher. Voltaire was as strong advocate of freedom of religion, freedom of expression, and the separation of church and state.
Arouet adopted the name Voltaire, an anagram of his surname spelled in Latin ( AROVET LI), in 1718.

During his lifetime he was never in, or out, of favour for a long time. After having been locked up in the Bastille twice he moved to England. His writings were banned from time to time. His contacts led him to seek refuge at the court of Frederic II of Prussia. But his mockery makes his sojourn untenable in the end. From 1758 he lives in Ferney in France near the Swiss border.
Here, the living legend became the vibrant center of a vast crowd of admirers. He accommodated famous guests, entertained with plays, and corresponded with writers, scholars, and Heads of State. Meanwhile he incessantly published militant writings against irrationalism, intolerance, hypocrisy, and abuse of power. Furthermore he stimulates local industry, works on the “Dictionaire Philosophique”, and manages to write a number of more lighthearted literary works like “La Princesse de Babylon” and “Candide”.

By the occasion of the performance of his tragedy “Irène”, Voltaire returns to Paris in triumph in 1778, where he dies only a few months later.
Voltaire is surely one of the key exponents of the Enlightenment, who had a large influence on the European public opinion of the day, due to his ideas, his defense of human rights, and his literary talent. In his historic studies he demonstrated the significance of the cultural-historical approach.

Jean-Antoine Houdon was a significant representative of Neoclassical sculpture. He was famous for his statues and portrait busts of meaningful figures in modern history of his day. His best known works are sculptures of Voltaire, George Washington, and Napoléon. Being more or less disregarded during his lifetime, today Houdon is considered the most important French sculptor of the 18th century. Replicas of his work are used for teaching anatomy to student artists.

Not everybody appreciated the work of Houdon. During his lifetime, Jean Jacques Rousseau refused to sit for Houdon. When Rousseau died, however, Houdon seemed the designated artist to make Rousseau’s death mask. He used it to sculpt a portrait bust.
For his sculpture of George Washington, Houdon was invited by Benjamin Franklin to visit mount Vernon, so Washington could sit himself for the portrait.

Houdon won the Prix de Rome in 1761. He stayed in Rome from 1764 to 1768. In 1771 he became member of the Académie de peinture et de sculpture in Paris. During the reign of Louis XVI he was associated to the French court. A cooperation that ended with the Revolution. During the Consulat and Empire he returned to work for the government. As head of the sculptures involved, he supervised the building of the “Colonne de la Grande Armée”.

Jean Antoine Houdon is buried on the “Cimetière du Montparnasse”.

Portrait Buste of Voltaire, after Jean-Antoine Houdon
Price on request 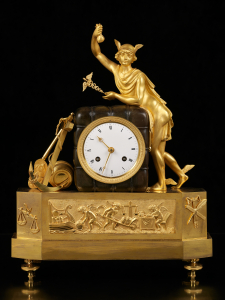 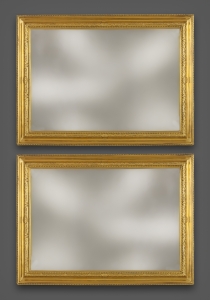 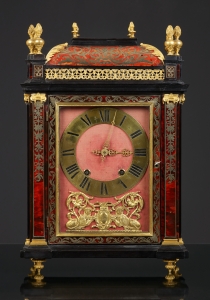