An ebony casket inlaid with pietre dure panels of symmetrical ornaments and flowers decorated with ormolu mounts with leaf and volute motifs.
Such richly decorated crates, often referred to as jewellery-boxes, are made in Florence as extreme luxury objects in the Gran Ducal workshops, which have become famous in particular for their work in pietre dure.
Pietre dure techniques were revived and advanced in Rome during the 16th century, and the antique mosaics unearthed during archaeological excavations of the era were a rich source for the polychrome marbles that were admired for both their beauty and ancient heritage. Pietre dure emerged as a refined art form, and during the 17th century the technique moved to the forefront of European decorative arts under the patronage of the Florentine Medici family.
In 1588 Ferdinando I de 'Medici established the ‘Gran Ducale' workshop, Galleria dei Lavori, which was renamed Opificio delle Pietre Dure in the mid-19th century and is still active in Florence. Generations of the de Medici family patronized the Galleria dei Lavori, which was a fabulous center of production, consisting of a number of studios for carpenters, furniture makers, woodcarvers, goldsmiths, draughtsmen, metalworkers, gilders and stone workers (or commettitori) who carried out the complicated work of 'fitting together'  the pietre dure compositions. These craftsmen came from all over Europe.
The Gran Ducale workshops flourished under the Grand Ducal commissions. Many beautiful objects were made during this period thanks to the presence of brilliant artists such as Giovanni Battista Foggini and Massimiliano Soldani Benzi. Giovanni Battista Foggini (1652-1725) led the Galleria dei Lavori from 1694 until his death.
With a unique flair, Foggini's creative imagination combined the decorative style of the Roman baroque that he had experienced during his period in Rome as a young man with a reinterpretation of the inventive late Florentine mannerism. Chests like these were made earlier in the seventeenth century, but under Foggini they became even richer. He not only designed the bronze mounts, but also the expensive panels and the chests themselves, which under his leadership came to a full height.
Drawings and sketches of related boxes and bronze mounts by Foggini in the Gabinetto disegni e Stampe degli Uffizi in Florence or those in the Metropolitan Museum of Art show the rich and abundant appearance of his designs for jewelery boxes.

At the drawing in the Metropolitan Museum especially the feet of the casket stand out, these are very similar to the ones on the casket described here.

Typical of Florentine art, but also because of its convenient, portable dimensions, these small boxes were in fact the perfect gift for foreign aristocrats and princes. Cosimo III and his successor Gian Castone de Medici sent these boxes as gifts to the ruling monarchs and potentates of Europe. This generosity was a constant factor in the foreign policy of the Tuscan Grand Dukes. It explains the presence of these chests in many European royal collections, and their absence in Florentine museums. It is not surprising that the exhibition in 2007 about Pietre Dure in the Metropolitan Museum was entitled: Art of the Royal court, Treasures in Pietre Dure from the palaces of Europe.
In this period, the Galleria dei Lavori produced masterpieces such as the medicine chest given to Pope Clement XII, the framed paintings and table given to the Elector of Saxony, now in the Grünes Gewölbe Dresden and of course the Badminton cabinet. This last object, the most expensive piece of furniture ever, was one of the rare private orders that the Galleria dei lavori adopted in the eighteenth century.

In this period the taste in England was entirely focused on such valuable objects. Visitors to the country houses where these Pietre dure caskets were, cherished and described them. The rarity of these caskets in the eighteenth century received admiration, pedestals were even made to present them nicer. The copy in The Vyne Hampshire still has this later foot from 1752. The coffin at Windsor Castle, which is very similar to the box described here in its bronze, its pietre dure panels and dimensions, also stands on a later added foot.
Similar caskets are also located in Vienna, Kassel, Berlin and Indianapolis. 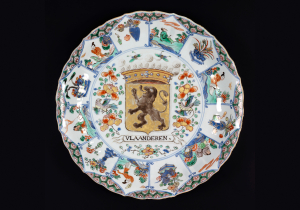 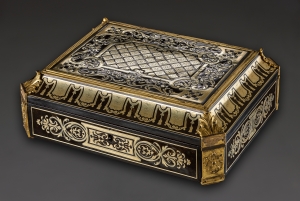 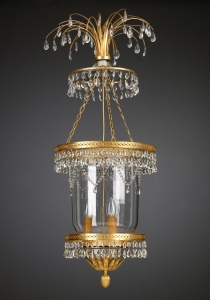