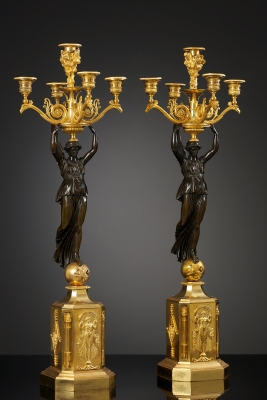 A magnificent pair of Empire gilt and patinated bronze five-light candelabra each with the stem formed as an ancient winged priestess with her hands held aloft  as she supports the vase on her head. This vase supports four branches that end in birds heads with each a candleholder on top. The priestess standing on a gilt bronze globe with a representation of Pegasus rearing on hind legs. The globe rests on a square truncated plinth mounted with Karyathides and diamond shaped ornamented cartouches with Imperial eagles in the centre. The truncated corners are ornamented with torches.

These sumptuous candelabra are identical in design to a known pair in the former Palais de Tuilleries. The overall design of the candelabra embodies the spirit of the Empire. The priestesses refer to the goût Égyptienne, as inspired by Napoleons Egyptian campaigns. The eagles pay reference to Napoleon’s reign and the representation of Pegasus symbolyses fame. The globe is symbol of the sovereignety over the world. Although the maker is unknown and neither of both pairs bear a maker's mark, their design compares with other candelabra and bronzes made by one of the most celebrated bronziers from the Empire periode, namely Pierre-Philippe Thomire (1751-1843). 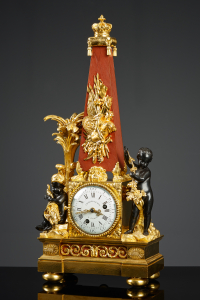 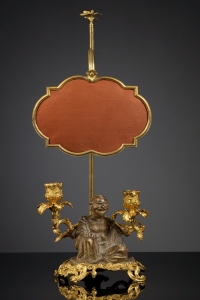 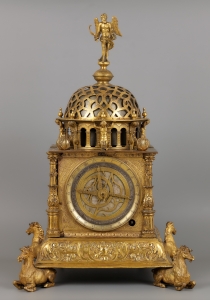