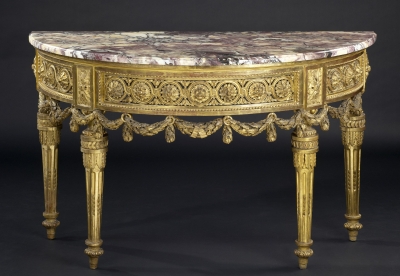 A demi-lune console table on four legs. The tapered and fluted legs are richly decorated, as is the frieze. The frieze shows strings of rosettes in connected circles and decorated with leaves in a beaded frame. Under the frieze a garland of braided ribbons that hangs from rings under the rim. The overall carving is of an excellent quality and finesse. The table has a top of Brêche-Violet Marble.

In 1770 Francesco Bolgiè, apprentice of his father Gian Battista Bolgiè of Turin, worked in Paris. There he undoubtedly was influenced by the “Parisian” interpretation of the classics, as he worked at the most notable workshops of the day. Once returned to Turin, Bolgiè worked for private and clerical principals but mainly for various members of the House of Savoye (Sardinia-Piemonte) in the Royal Palace of Turin.
Bolgiè was much acclaimed for his designes of the paneling of the new ballroom of the Royal Palace and as designer/maker of the decorations in the appartments of the Duchesse of Aosta in the selfsame palace.
Bolgiè, as well as Guiseppe Bonzanigo, played an important role in the design and development of Neoclassisist decoration of the Royal Palace and is seen as the most important designer of wainscoting, consoles, commodes and mantle mirrors. From the accounts of the Court, Bolgiè fulfulled numerous commisions for the House of Savoye between 1775 and 1825.
The considerable resemblance in form and design with the documented work of Bolgiè makes that this console table can arguably be attributed to the master himself. 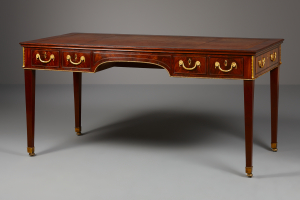 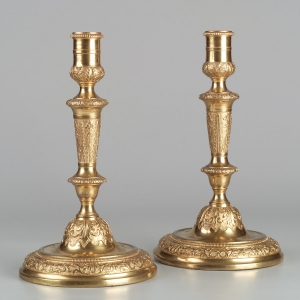 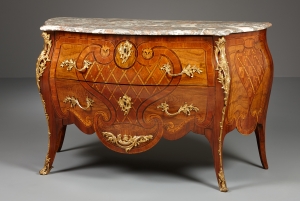