An elegant, richly carved Maastricht corner cabinet, resting on a grooved and carved plinth. Crowned by a single-arched hood with a centred rocaille relief. The four curved panel doors with sleek profiled mouldings, a rocaille motif at the top and bottom, framing the intricate  asymmetrical Louis XV carvings of stylized roses, blossoming floral shoots and rocailles. This decorative pattern is repeated next to the doors and in the hood relief. The mouldings flanked by the doors are decorated at the top and bottom with bombe rocailles. Several shelves behind the doors.

The period from 1730 to 1780 is generally regarded as the heyday of the Liège art of furniture design. The woodworkers in the Prince-Bishopric principality of Liège adopted the French Baroque style with its symmetrical designs around 1700 and created their own variations. For almost the entire eighteenth century, the craftsmen maintained the balanced structure of the furniture. However, with their carving, which looks like lacework, they not only enriched the front of the panels but often the corners and the crown as well. Most Liège furniture is made with oak wood, which is in abundance the nearby Ardennes forests. Ash wood, domestic and wild, cherry and beech were also used, but to a lesser extent. The sea shell is also the decorative motif par excellence during this time. One can roughly date the piece just from looking at the design of the furniture,. While the shell motif was still strictly symmetrical at the beginning of the eighteenth century, its form gradually became more and more a-symmetrical, more boisterous and freer until, at the end of the century, the development of the shell’s design came to a halt. It’s striking that, in contrast to Namur furniture, for example, the carvings of Liège furniture are carved out of the solid wood. At the beginning of the century, in addition to the shell motif, the favourites were palmettes, lambrequins, acanthus leaves and damask imitations in wood, the so-called ‘fonds quadrillés à fleurettes’. Later, twigs and shoots with budding flowers, including roses, daisies and carnations, were in fashion. The stems of the flowers were often carved separately from the furniture, giving them a distinctive elegance. Artfully carved flower baskets and the C and S shaped motifs of seed beading were also frequently used for decoration.

A remarkable decorative motif, called “motif perspectif” in professional literature, was applied to adorn this corner cabinet. An architectural element, it is commonly part of a rocaille and usually shaped  as a base with several flowers. Although this motif is also found elsewhere, such as in a stucco ceiling in the Kruisherenkerk in Maaseik, in the woodwork of an altar by Couven in the church of Eupen for example, it is striking that it appears to have been especially popular in Maastricht. This “motif perspectif” was incorporated in the facade adornments of numerous monumental buildings in the city and was applied as a base in rocailles. The combination was also regularly applied in eighteenth-century Maastricht silver and the motif can also be found in several drawings by Matthias Soiron.
Another typical feature that clearly positions this corner cabinet in Maastricht is the vaulted plinth at the bottom, giving the illusion of supporting the cabinet. Also characteristic are the protruding bombe carvings at the top and bottom of the door liner. 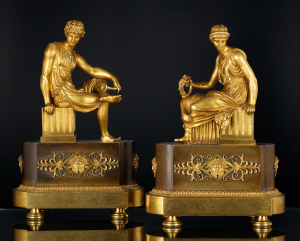 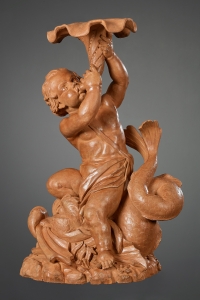 Flemish Terracotta sculpture of Triton on a Dolphin
Price on request 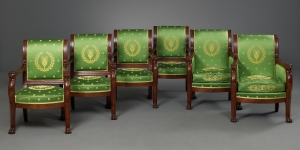