This is the signature of Jacques Bircklé (1734 – 1803) who became a “maïtre ébéniste” (master furniture maker) in 1764 and who also was a “Juré des Menuisiers-Ebénistes”: a Juror both of the Guild of Woodworkers and the Guild of Furniture makers.

Jacques Bircklé produced wonderfully varied and fashionable furniture, always of the highest quality. He was an exceptionally able marqueterie maker and used different sorts of wood and coloured wood to great effect. He frequently used light coloured woods on a darker ground and his themes: vases, flowers, garlands and music-trophy’s are usually surrounded by a Greek fret.
Bircklé used to work for members of the French Royal House: Queen Marie-Antoinette, Madame Elisabeth (the youngest sister of King Louis XVI and the Duke of Orléans. And to this day his work is to be found in the Palace of Versailles and the Petit Palais in Paris, as well as in the Museum of Decorative Arts in Paris.

The commode of Transition form with a breakfront, has two drawers. The four rounded off corners as well as the corners of the breakfront are decorated with marqueterie representing a fluted column. The front of the commode is divided into three panels, the sides contain one panel each. All panels are surrounded by Greek frets.
The middle panel on the front shows a music-trophy with a violin, several flutes, drums, a horn and a score. Added to the instruments and score are a quiver, a torch and two birds.
On the left and right of the front the marqueterie within the panels consists of bunches of flowers. Both on the right and left side of the commode, the marqueterie shows a plinth with a vase containing several flowers.

The marqueterie of the middle panel on the front is very similar to that on a commode illustrated in Kjellberg, Le mobilier français du XVIIIe siècle, Paris 2002, p. 77, ill. d. 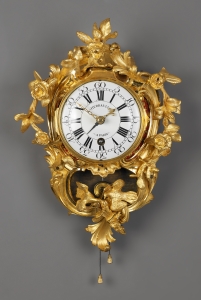 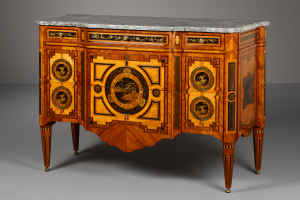 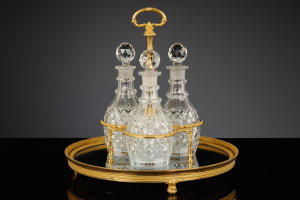