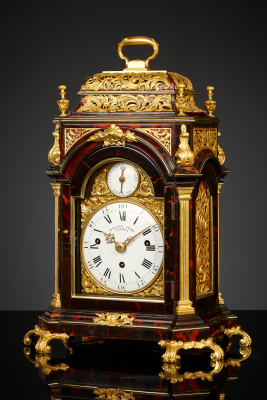 A fine, lavishly decorated ormolu and tortoiseshell musical table clock made for the Ottoman market.

Case.
The oak case with tortoiseshell veneer is decorated with gilt bronze and gilt brass, with foliate gilt-bronze mounts applied to the bell top surmounted by a handle. The chamfered angles of the case have gilt-bronze fluted pilasters; the brass-bound stepped plinth base with outset angles rests on twin bracket feet. The front of the plinth is decorated with a gilt bronze ornament at the centre. The sides of the case with fretted and engraved gilt-metal sound panels with foliate motifs, similar quarter panels to the front above the case’s little door that gives access to the dial. The doors (front and back) can be closed by means of a lock.

Dial.
The small breakarch gilt brass dial plate with foliate and scroll gilt bronze spandrels framing the two enamel dials. The larger of these tells time with Roman numerals for the hours and Arabic numerals indicating the minutes. In the centre, below the XII the signature: "William Story London" (1737-1784). The small dial indicates the three available melodies: La Romeaca, Air Greek and Air Turque. The music tunes can be selected by means of the small hand with the Turkish moon. At the right, near the numeral III, is a lever to switch the striking and playing mechanism on and off.

Clockwork.
Spring-driven by strings, brass platform clockwork, six pillar going, striking and playing movement. Going train on spindle and short pendulum. Hour striking on a bell, followed by a melody. The music mechanism plays on a pinwheel with 16 hammers on eight bells and includes a pull repeat; this also applies to the percussion. The backplate is delicately engraved with scrolling foliage.

Clocks for the Ottoman Market.
In eighteenth-century Europe, a growing interest in Eastern cultures rose. Both the Far East and the Near East were a great source of inspiration for craftsmen, which resulted in the art movements known as Chinoiserie and Turquerie. That the East was also interested in objects from the West is less known. Many clocks, especially from England, found their way to imperial circles in China, where clocks with elaborate movements or ingeniously made automatons were very popular. Lavishly decorated cases with exquisite decorations and outlandish designs were highly prized.

From the beginning of the eighteenth century, an increasing number of table and bracket clocks were manufactured for the Ottoman Empire. The empire was much larger than present-day Turkey, extending over three continents, including regions such as the Balkans and large parts of the North African coast. In order to meet the wishes of the Ottoman clients, the makers of the clocks had to take the laws of the Islamic religion into account.
For instance, the depiction of human figures was prohibited. For instance, automats depicting processions of people were therefore unacceptable, but representations of windmills or ships were permitted. While the emphasis lay on the quality and reliability of the timepiece, it was equipped with a playing mechanism featuring melodies aimed at the target market. The clocks were often mounted in architectural cases, of which the design was playfully based on Eastern traditions.

The cases were customarily decorated with tortoiseshell or lacquer work, and, in some cases, they were equipped with crystal domes and pinnacles topped with the Islamic crescent. Gilt bronze mounts were not deemed too flamboyant by the buyers, but as a logical element of this type of clock. Dials featuring Turkish numerals could also be requested, instead of the Roman numerals that were customary in the West.

It is a fact that the names with which English clocks were signed were often not the names of those who actually made them. The signatures that recur repeatedly, such as George Clark, Ralph Gout, Henton Brown, and George Prior, were frequently the retailers, who had connections with the buyers and patrons. The actual clockmakers, who must have produced timepieces such as this one in large numbers, have always remained anonymous. However, they clearly must have been gifted with a high degree of craftsmanship and knowledge. 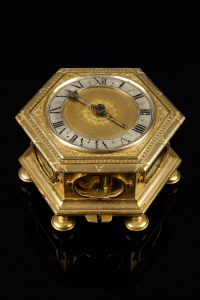 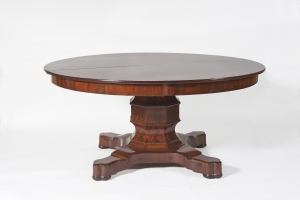 Dutch Round Table
Price on request 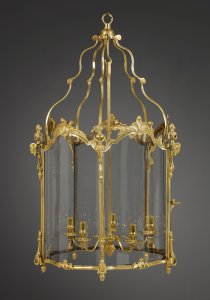